Who would have thought, a Taxi vs Grandma's chariot?

Racewars 2018 saw the creation of a monster - one of Australia's worst vehicles, the AU Faulcon would become the Racewars "unsafety car"

Put together on the cheap with a later model Falcon turbo, valve springs, head gasket and a cam - this thing reeled off 450+HP dyno figures without a care in the world. 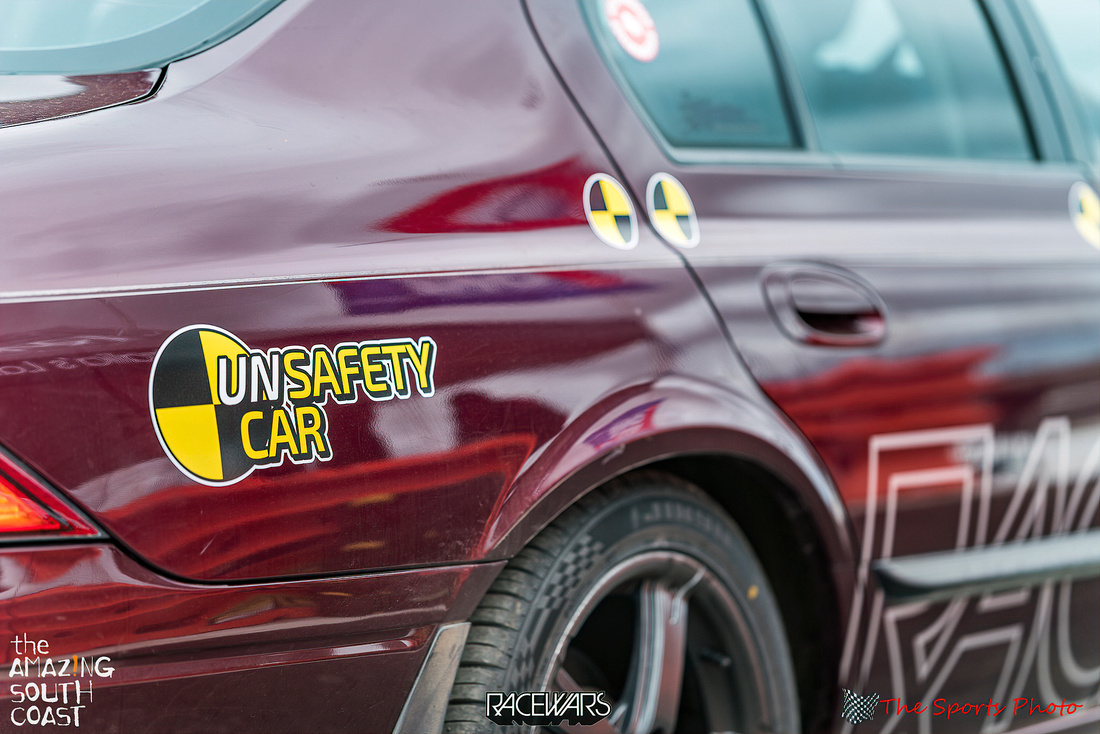 Roll around to 2019 and word of a new challenger to the crown of crappiest but fastest vehicle had emerged.
WTF Auto - one of Perths best Toyota workshops, well known for delivering wildly powerful MR2's and Supras had decided they would step up to unseat the mightly Falcon from its perch.

Their choice of weapon was the grandparents favourite - the Camry.
Well known to be as reliable (and boring) as hell, the WTF Auto crew remained tight lipped about exactly what was going to be done under the hood.
Due to the cars grandparent attraction, the car was affectionately named Grannypants.

In the leadup to Racewars 2019, it went to the Perth Motorplex and promptly destroyed a tailshaft and the WTF Auto team were quick onto the social media banter to pay them out.
This was before the Camry had been seen in action - a big call!

The banter continued back and forth between the Racewars Team and WTF in the lead up to the event, and we all knew that there was only one way this was going to be settled: on the strip.

Fast forward to Racewars weekend, and the AU was seen out and about, and made 4 passes, proving to be both reliable and quick.
The Camry was spotted at the WTF Auto stand but the team were confident (or not confident?) enough to run any passes during the day. 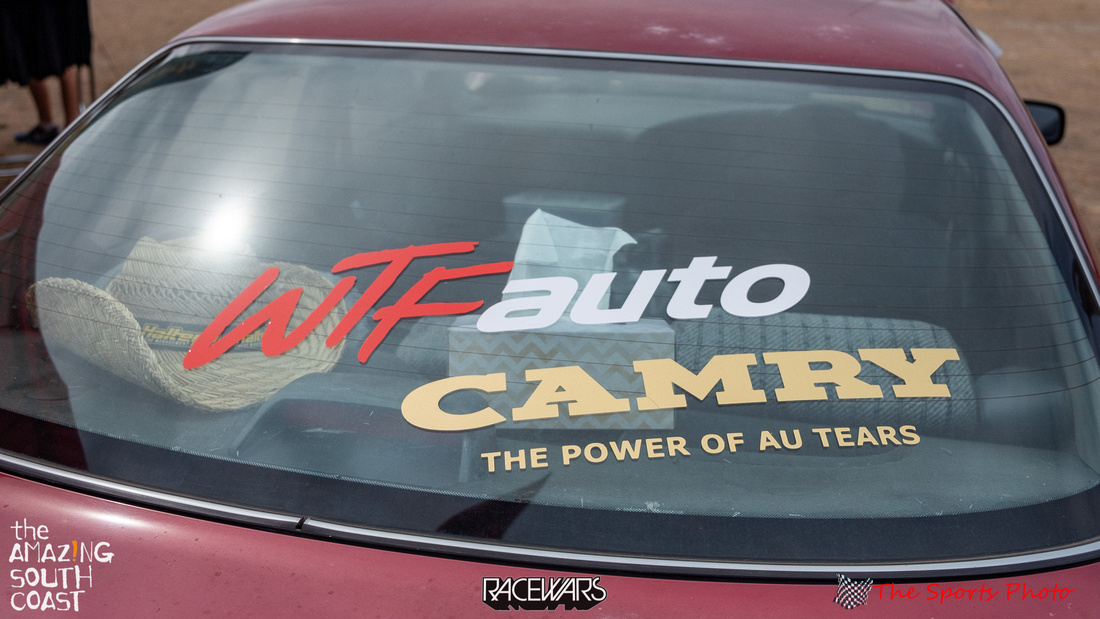 The last race of the day, and the moment was finally here.
The AU was parked up in the staging line, ready and raring for a fight - when the camry appeared in what looked to be a cloud of oil smoke.
This didn't seem like a good start, but WTF Auto's head honcho Tristan didn't look phased. 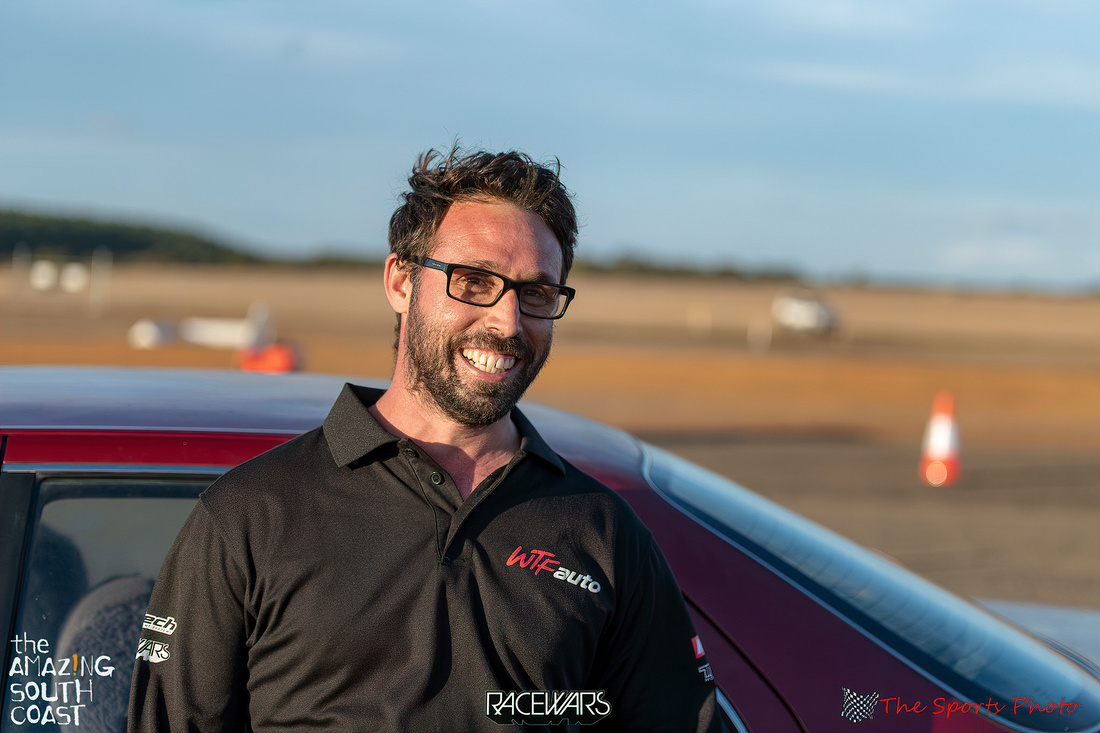 So started the face off between Jon and Tristan. 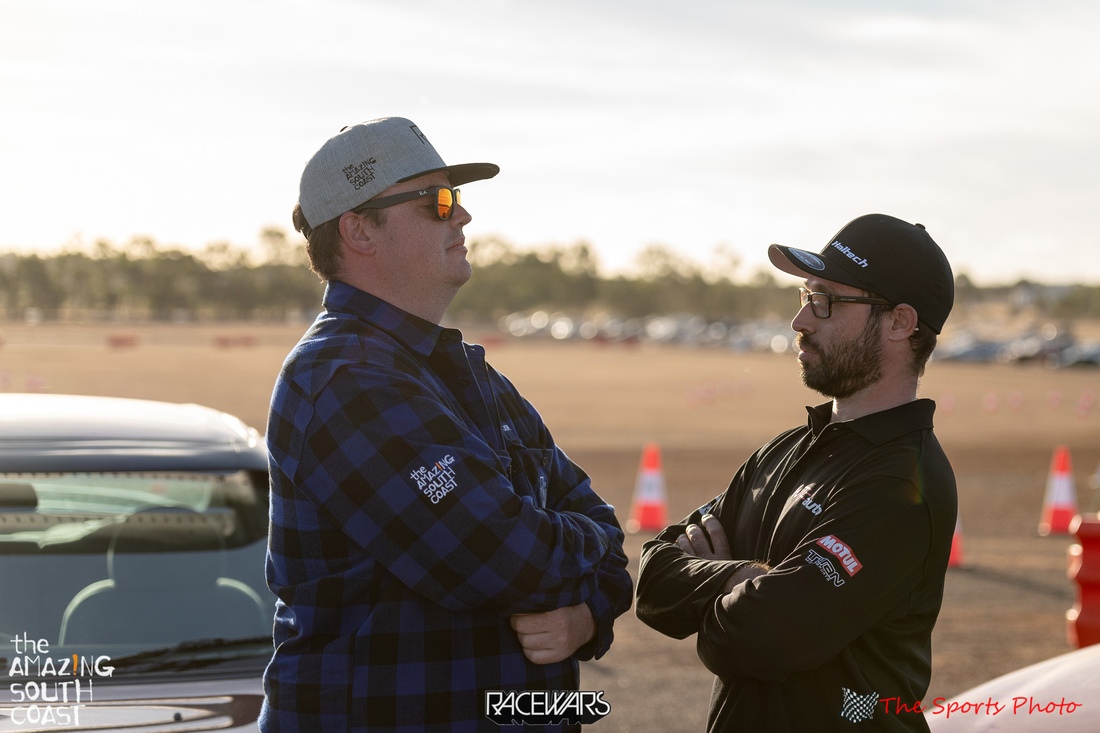 An inspection of vehicles started.

Jon gazed over the amazing FWD v6 and turbo of the Camry, amazed at just how factory it looked but wondered what trickery may have been hiding underneath. 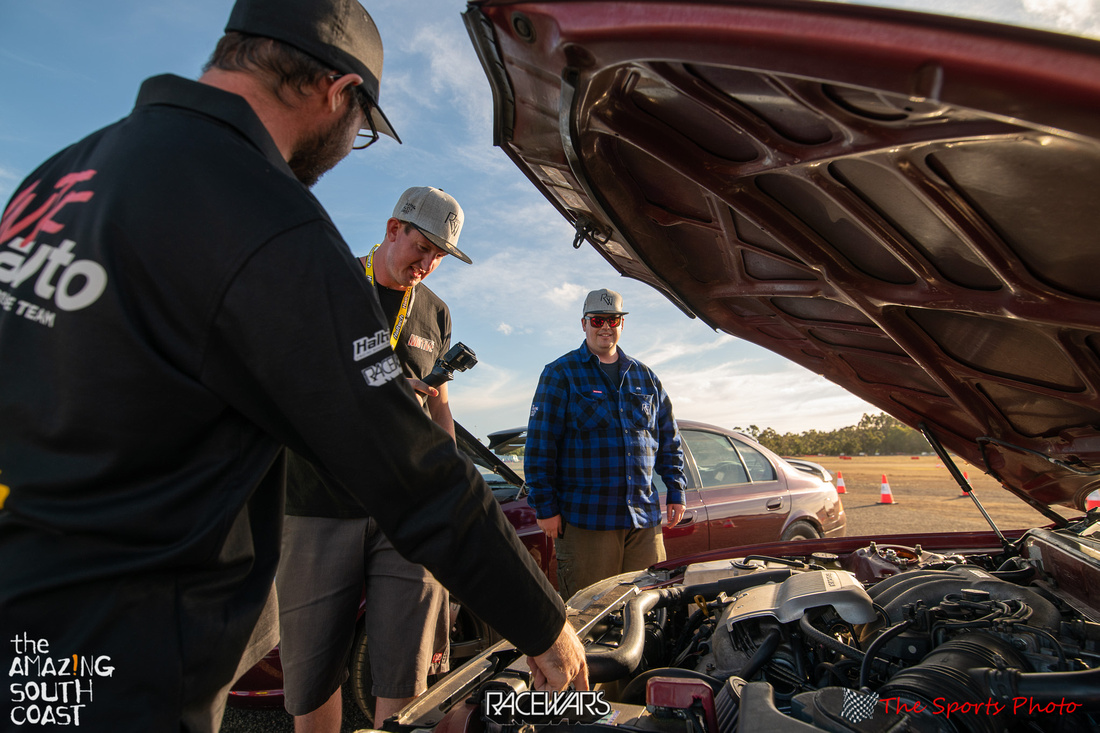 Here is where we hid the nitrous

The banter continued, with Jon making note of the fact he'd run 4 passes.
Tristan countered with the fact that only 1 pass mattered, and to be honest he was right.... 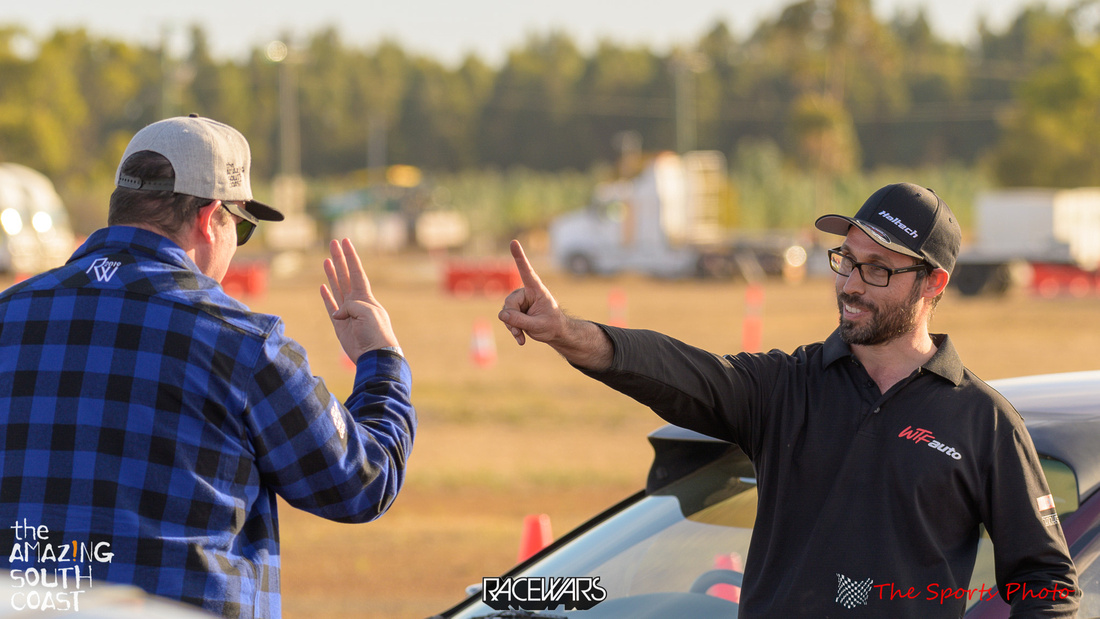 With this, the two combatants were separated and headed for their burgundy chariots.
They both lined up on the line, the revs (and smoke) built and the lights were changed out for a good old fashioned arm drop. 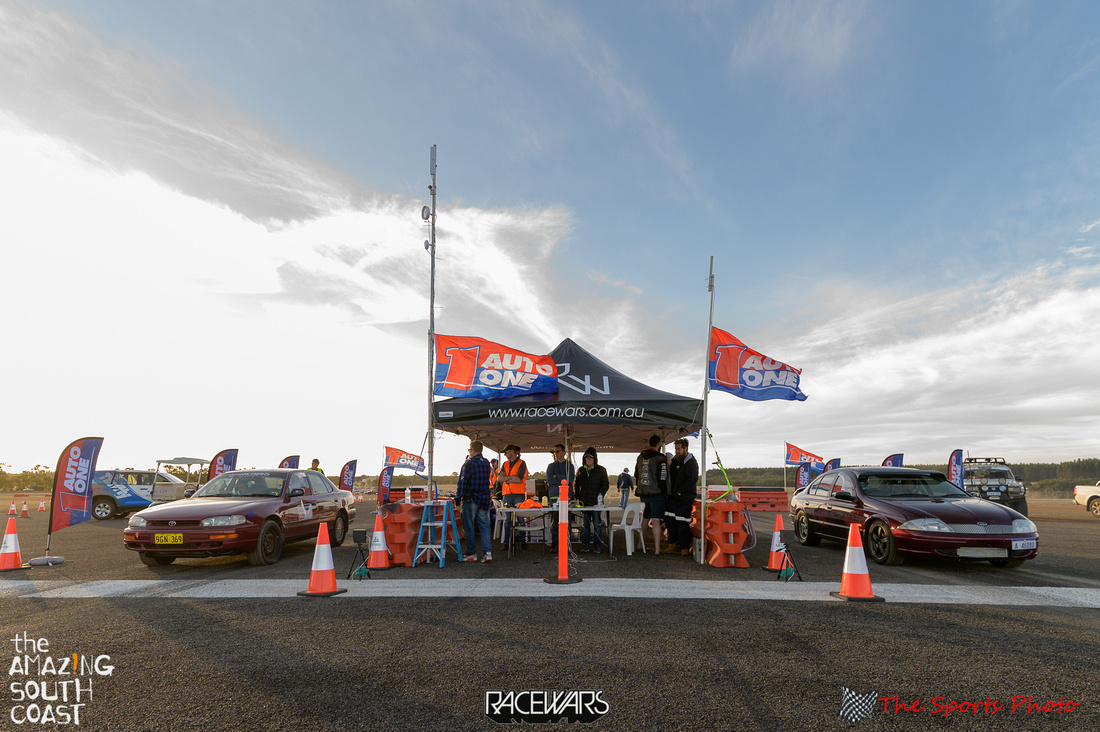 On the staging line

The arm went down and the AU launched off the line like a whale beaching itself on Albany's beautiful beaches.
The Camry generated smoke from both its exhaust and its front tyres, the FWD layout scrabbling for traction.

Looking down the runway showed the increased traction that the AU had off the line, as it marched down the strip.
Later video showed that the Camry was picking up speed, but there was no hope of catching up to the Taxi. 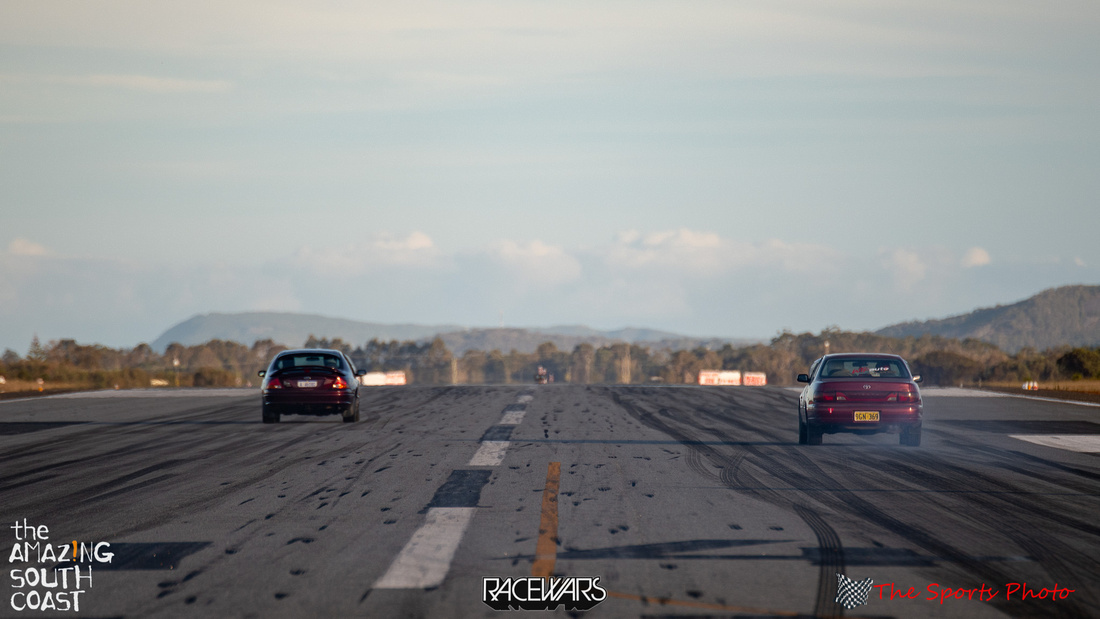 The competitors turned around and returned back to the finish line.
Well, the Camry did... Jon in the AU decided to go do a lap of honour and show off his steeds victory to the crowd.
As you can see below, there was a smile on the face, even in defeat. 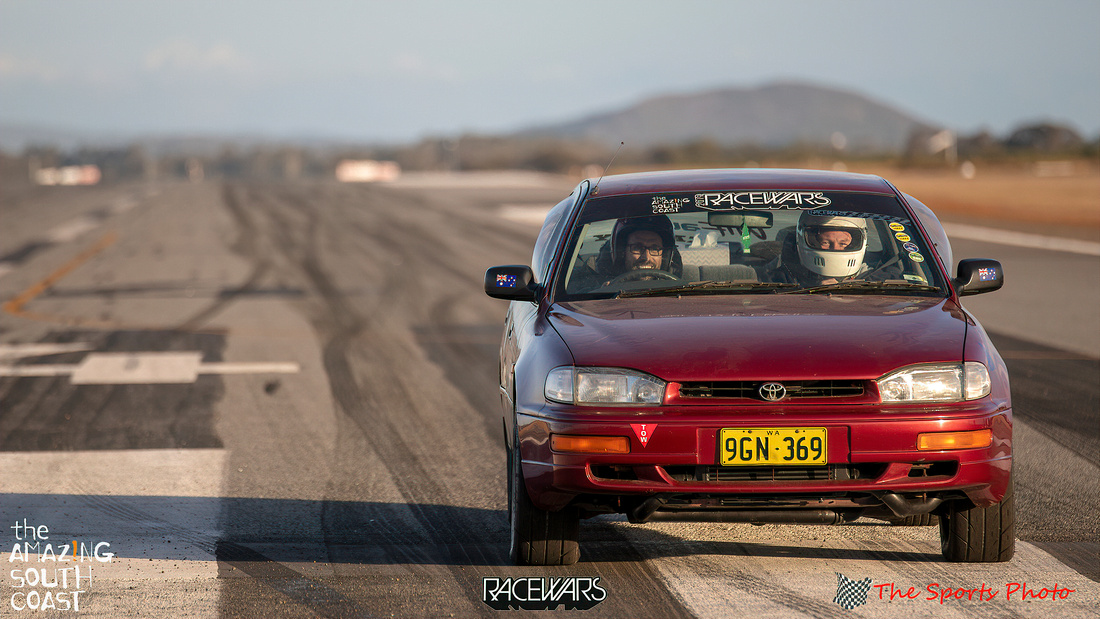 So the race was run and won, the AU maintains Australia's honor as the fastest, crappiest car in the land.
Grannypants and the WTF Auto team will have to go back to the drawing board.
Maybe another year of development will allow them to take the crown, but until then.... 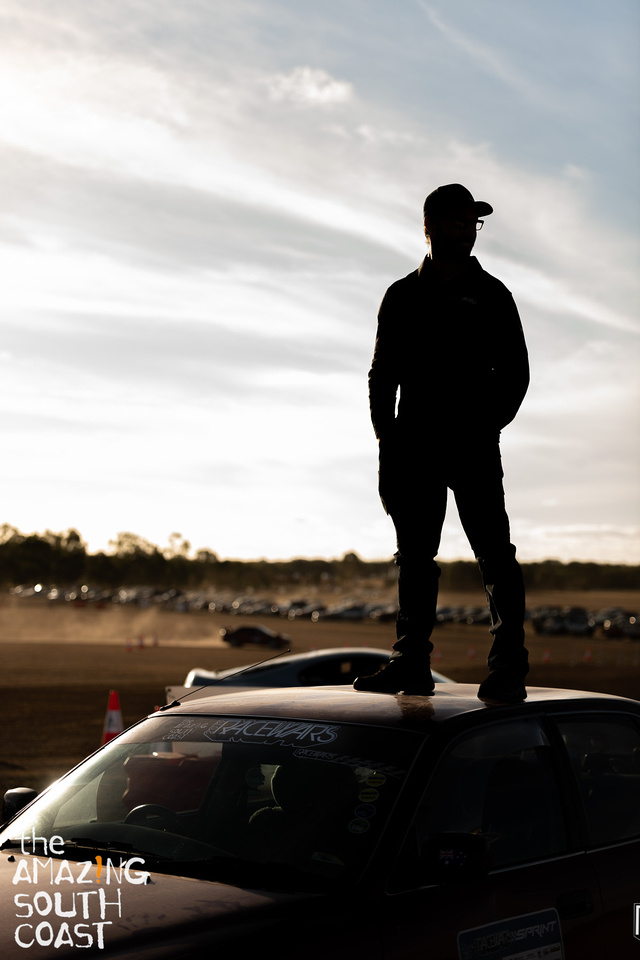 Tristan atop his steed, coming back harder and faster next year

Feel free to check out the below for more information on the banter
Racewars Radio: Racewars Radio
WTF Auto: WTF Auto